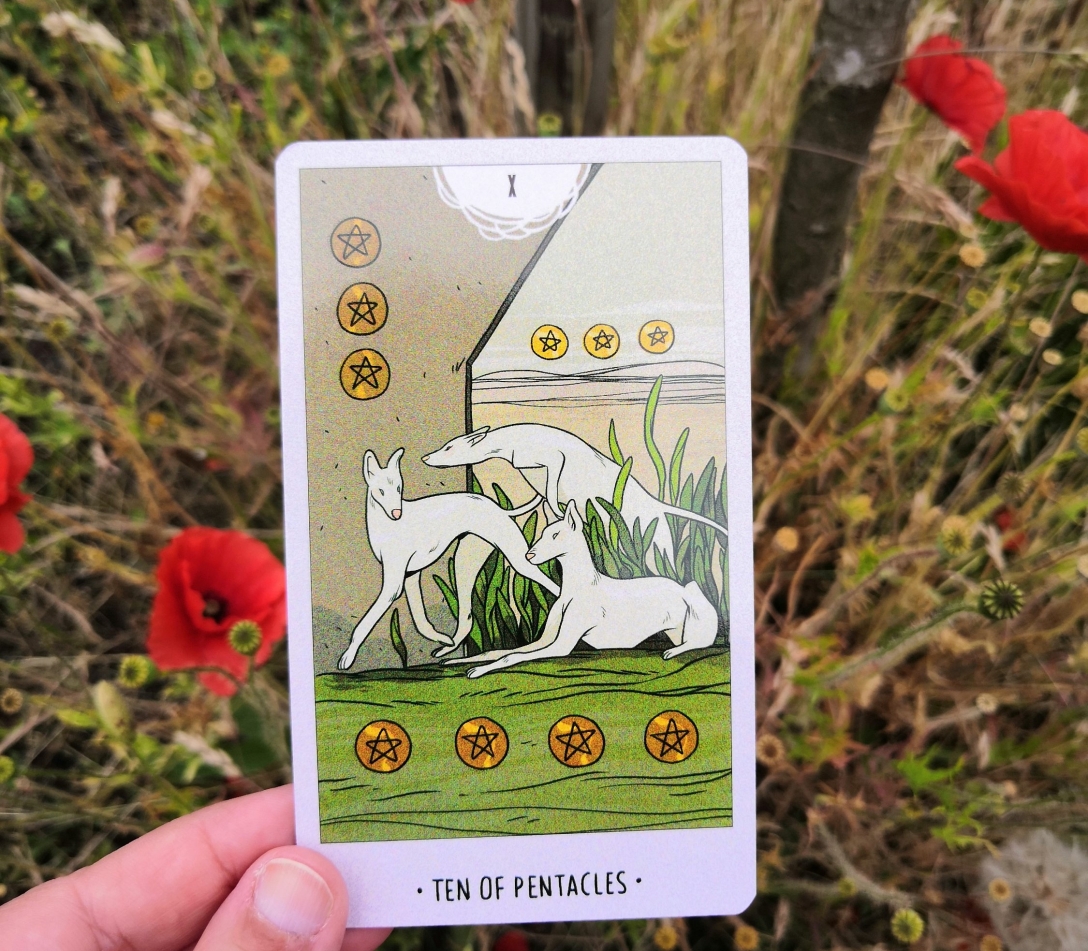 Loving a tarot deck that I’m not supposed to love! What should I do?

Dear diary,
I am conflicted today. After watching an unboxing of The White Numen Tarot, I feel drawn towards its energy. Something primal, animist and Hekatean grabbed me. Should I accept my feelings or listen to my brain?

Here I am, holding the deck in my hands, charmed, mesmerized and a bit overwhelmed by how good it is at delivering messages. The White Numen called. I answered. Something is happening between us.

Yet, I can’t leave aside my reservations. It’s not that I enjoy nit-picking on any specific deck! It’s a broader issue! No matter how actively the tarot community engages in diversity and representation, it keeps pushing some people towards the margins.

The pathologisation of fat people is rampant. It is probably the main reason why most creators and publishers refuse to offer representation to us (and from us!). I can’t accept it though. Half of the population in my country isn’t thin! Why would they invisibilize us?

In June, everybody (especially companies) seemed to « celebrate » (not fight for though) queerness, including in the tarot industry. This wouldn’t have been possible 50 years ago. Queerness was then considered an illness, something to cure, something illegal, something to erase from our society. All of which sadly still exists. But so much has changed with regards to mainstream representation! Why is it so difficult for a similar shift to occur in the way we depict, understand and celebrate fatness?

The White Numen Tarot, like most tarot deck, is a thin deck. It’s a skinny deck.

What about the few bigger queens and kings? Good question. They respect a long tradition in tarot decks. Any bodies that fall out of the norms serve as visual metaphors for something else (whereas the norm just is, enjoying its privilege of default setting). In this case: status, power, authority. We are left to wonder. Are they actually less thin than their counterparts throughout the WN? Or are they merely more covered in layers, fancy coats, and royal cloaks which reflect their experience, social function, lavishness as well as the space they occupy symbolically?

Furthermore, the WN presents a lot of eroticism, nudity and desire. All for skinny people of course! Numen forbids there would be various and rich representations for fat folks!

This point was a primary concern with the WN. Its erotics and esthetics don’t speak to me as a queer person. I do not doubt other people will love it and it’s all fine. However, this visually stunning deck is also a bit too beautiful for me. It feels normal, normative, and smooth. As opposed to the raw, rebellious, queer counterculture I identify with! There is a hypersexualisation of bodies that doesn’t work for me. It doesn’t resonate with my imaginary realm.

When the WN called me initially, I remained guarded. Because it depicts this world utterly different from mine, I was sure we wouldn’t match. Well, I’m happy to say I love it despite our differences.

None of my reservations proved wrong. Quite the contrary actually. The WN might be worse than what I expected in terms of representations. BUT maybe I needed a conventionally beautiful, normatively attractive deck in my collection.

Above all, there is a depth beyond the surface that sucks me into its ancestral world. This deck is a trickster. It’s exactly what I anticipated and simultaneously much more than my expectations. Yes, it’s gorgeous. But it’s also rapturous. It asks me to surrender to its undercurrents. The stream of divine voices catches me, eager to swallow me whole. I let go of my indecisiveness. I embrace the Numen.

Loving a tarot deck that I’m not supposed to love! What should I do? Giving in!

The White Numen Tarot limited edition was sent to me by publisher Liminal 11 to share my review.

PS: Shout out to the Fat Folks’ tarot, a real game changer!

Even though it might sound slightly dated now, I wrote a whole column on the topic of Fattening up our tarot decks: http://blog.littleredtarot.com/columns/fat-tarot/

If you enjoyed this review, you might be interested in what I wrote about the wonderful New Chapter Tarot.

Thank you, Babelutte, for your help!